How Children on the Move are Vulnerable to Human Trafficking

In honor of National Human Trafficking Awareness and Prevention Month, we hosted a Facebook Live featuring UNICEF child protection specialist Kerry Neal. Learn about the risks millions of children on the move are facing, including exploitation and trafficking.

Battling Human Trafficking: How Far Have We Come and Where Do We Go From Here? 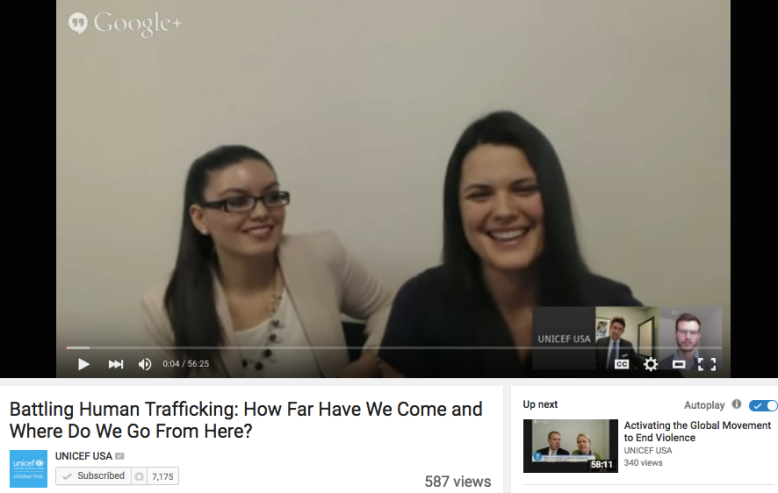 In honor of National Human Trafficking Prevention Month, Emily hosted a Hangout on behalf of UNICEF USA featuring UNICEF Child Protection specialist Joost Kooijmans. He highlighted the work UNICEF does to address harmful social norms and strengthen systems to help address child labor. Globally, 168 million children are engaged in child labor. More than half of them – 85 million – are in hazardous work. You’ll learn about how child labor and trafficking is affecting children around the world, and what you can do to take action! January 2015. 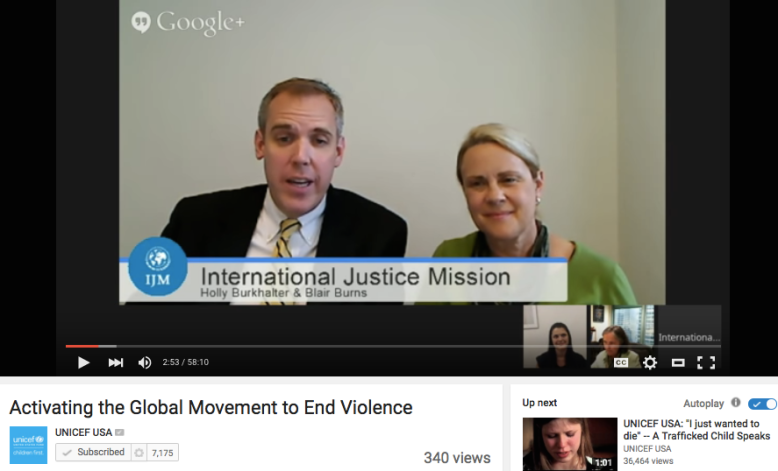 Emily hosted a Hangout on behalf of UNICEF USA where she spoke with experts from UNICEF and International Justice Mission to talk about their work and to discuss how we can all work together to end violence once and for all. Violence against children is everywhere, but most people turn a blind eye, making it invisible. All people have the right to live free from violence. Violence harms physical and mental growth and holds back society as a whole. But violence can be prevented when people come together and say that it is not acceptable. When they make the invisible visible. May 2014.

Why We Need to Address Demand

Human trafficking is a business, operating on the principles of supply and demand. There is a large demand for commercial sex, cheap labor, and cheap goods. As long as this demand exists, children, women, and men will remain at risk of becoming the supply. On this Hangout, Emily was joined by colleagues at the Chicago Alliance Against Sexual Exploitation (CAASE) and Not For Sale’s Free2Work. CAASE discussed the demand for sex trafficking and how they’re working to address it, specifically with youth. Not For Sale shared about the demand for cheap goods and therefore cheap labor and how their app, Free2Work, helps inform consumers about the purchases they make. November 2013.