Ecocide and Human Rights: A Focus on the Democratic Republic of Congo

Colleagues and I participated in Oxford’s Global Map the System Challenge. We focused on the intersection between ecocide, human trafficking, and armed conflict in the DRC and the connection to conflict minerals which taint our supply chains. We placed second at the University of San Diego in the competition. The full infographic we submitted for round one can be seen here, while a portion is included below. 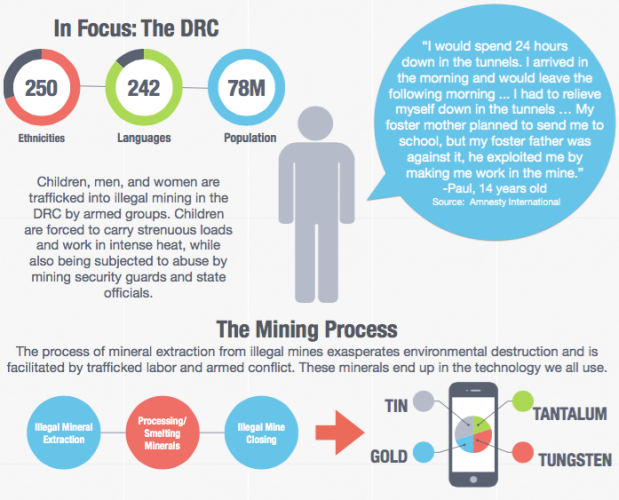 Along with five colleagues, I conducted a case study and analysis of Unilever’s Sustainable Living initiative. We focused primarily on the company’s role in sustainably harvesting palm oil, as this product can have detrimental effects on people and the planet when harvested.  As part of a Sustainable Supply Chains course at the University of San Diego’s School of Business, our work will be published in a book on Sustainable Supply Chains. The expected publication date is fall 2018.

Along with four other students, I developed a case study on Equal Exchange as a leader within the Fair Trade movement. In addition, we developed teaching notes so that others could facilitate activities and provide supplemental reading when teaching this case study. It is appropriate for students studying social innovation, sustainable business, corporate social responsibility, sustainable supply chains, economic development, and more. You can access both of these resources below:

Along with my partner, Bianca Alvarado, I developed an analysis of Patagonia’s role as a leader in the sustainable fashion movement. This was conducted as part of an independent study for the Masters level Sustainable Global Supply Chains course at the University of San Diego’s School of Business.

Unfortunately, an ugly story of “support the troops” is that men and women who have served in factions of the US services have been deported after their service, never having been granted the citizenship that they have a right to after enrollment. While the exact number of deported veterans is unknown, cases have been documented in at least 34 countries.

As part of a field-based practicum under the Trans-Border Institute, I worked with 18 other students to identify and interview deported veterans in Mexico, their family members in the United States, and the US public. The project’s aim was to better understand the number of deported veterans – since the US government has not documented the situation – and learn more about their cases. Using what we learned, we now seek to influence public opinion and policy in ways that benefit this population – through revisiting their deportation cases, creating more access to their benefits, and preventing this problem from perpetuating. During the project, one of the veterans that we interviewed, Hector Barajas, was granted citizenship and re-entered the US in 2018.

Read more about the project here. The full report is expected to be published in summer 2018. 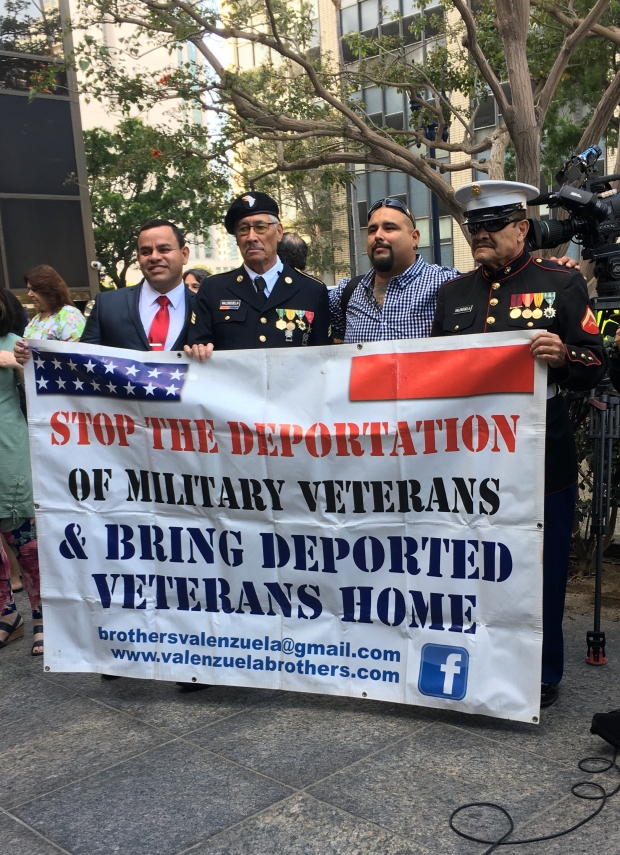 The brothers Valenzuela – who are currently facing deportation – stand before the media for interviews at the welcome home ceremony for Hector Barajas.

Promotional Video for the Masters in Social Innovation Program

In the fall of 2017, the Kroc School for Peace and Justice Studies at the University of San Diego asked me to represent the Masters in Social Innovation program by writing and narrating a promotional video. Collaborating with another talented student who was in charge of illustrating the video, we created this tool for recruitment purposes. The video has been used in outreach and is played on monitors throughout the Kroc School building.

In my role as the Graduate Assistant at the Changemaker Hub at USD, I led the team that hired and mentored our Social Change Corps (SCC) program. SCC supports students wanting to explore changemaking opportunities by providing financial support and mentoring. This initiative promotes students’ understanding of social issues and social justice as they actively participate in a community-based or social enterprise experience, locally or abroad.

Due to my role as a Graduate student, in 2017 we opened the program up to Graduate students for the first time. We were proud to welcome 12 teams exploring issues including diversity and inclusion in Greek Life, increased accessibility on campus, Fair Trade, and environmental sustainability.

In 2014, UNICEF USA’s End Trafficking project and the National Consortium for Academics and Sport (NCAS) partnered to create Shut Out Trafficking, targeting 10 college and university campuses annually across the United States. The program engages prominent student-athletes, coaches, athletic administrators, survivors, and students to speak out and educate their peers during a one-week program at each university. Our goal was to empower campus communities to speak out and take action against human trafficking.

As of January 2017, Shut Out Trafficking had reached over 47,000 people through 102 events at 24 Universities. The program had garnered over 33.8 million impressions on Twitter with the hashtag #ShutOutHT and has been supported by hundreds of volunteers and dozens of participating organizations. The program continues to this day.

GIFT Box is an interactive, walk-in piece of public art that was launched by UN GIFT and Stop the Traffik during the 2012 Olympics in London to raise awareness about human trafficking. In the fall of 2013, I worked as a member of the NGO Committee to Stop Trafficking in Persons (CSTIP) to bring the GIFT Box to the USA for the first time.

From 2013-2017, I worked as a representative for GIFT Box in the United States to help train coordinators to recruit, train, and manage volunteers to expand GIFT box efforts throughout the country. I directly supported volunteers in several installations in New York City, reaching nearly 3,000 people in total.

In order to engage constituents on a platform that was becoming increasingly popular, we launched an End Trafficking podcast on iTunes in 2015 that covers a range of subjects including Fair Trade, Women’s Rights, and the National Human Trafficking Hotline. The podcast was featured on iTunes “News and Noteworthy” section after its launch.